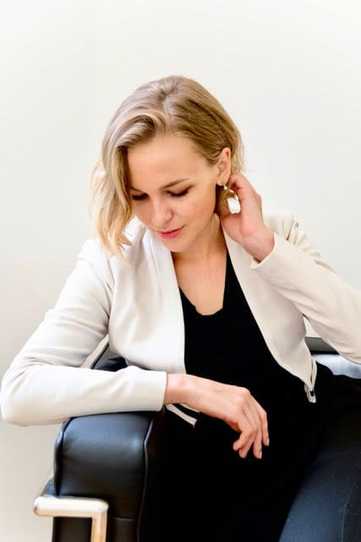 I left my finance job in 2015 to launch Silkarmour, an online platform created to cater to every possible fashion need of the modern career woman. At Silkarmour, we believe that the process of dressing for work should become like a morning ritual that prepares you to become the best possible version of yourself for the day ahead.

In retrospect, having spent my childhood moving between many different countries (my parents travelled for business) and being exposed to new situations, definitely helped in the jump from a stable job to starting a business; it is not much unlike having to learn a new language in a foreign country. Although the company is still very young, the support from our customers has been so encouraging. I think now more than ever (especially after the election of Trump), women are recognising the need to rebalance the scales in the corporate world and beyond. We need to take our seats at the table, but on our terms – simply becoming copies of men would defeat the point. To do this, we need the women who are out there breaking the glass ceiling to be able to do so with confidence and ease, whilst unapologetically being their already powerful and beautiful selves.

RB: Tell us the why behind your business.
GN:  Having worked in what is still very much a male-dominated industry it quickly became clear that the women in these professional environments often did not have access to the same resources the men did. Young male analysts are prescribed a suit and tie uniform when they first enter their professional careers. As they progress, a cufflink here or Hermes tie there is used to show their authority level and personality. In contrast, women have a far wider but also more confusing array of options. Many of the fashion companies today focus on what may be very “on trend” pieces, but they are not necessarily catering to the woman who has to look authoritative when speaking up in a boardroom, competent when applying for that first job, or showing her own sense of flair when pitching for new business. Ironically, these are also the women who often have the least amount of time available to shop around for the right items. Silkarmour curates the best pieces each season from a wide variety of designers so that dressing for the job at hand becomes an easy and inspired experience.
RB: What major challenges did you face when setting up your business and how did you overcome them?
GN: Moving from the corporate world into the startup world definitely took some adjusting. Suddenly, you are the “Chief Decision Maker” on everything from hirings to social media management and financial planning. With so many exciting changes happening on a daily basis it can be quite easy to feel overwhelmed or isolated from the world around you.Having never worked in tech before and with the platform largely being an e-commerce business I had to learn a lot of things on the way.   Speaking to other women who are on a similar path and reading books about other journeys has been endlessly inspiring and helpful; so many of the barriers you will encounter have already been overcome by others.

RB: Who has been the greatest influence on you since starting your venture and why?
GN: All the strong independent women who are masters of their own life. I look around and am always so amazed by the women of this world. Despite women having more freedom and rights now than ever before, it is always shocking to remember that essentially 50% of the human population has been largely repressed for not only generations, but thousands of years. But despite the inequalities that continue to exist women do not call for wars, become bitter, or react with aggression; instead what I see is compassion, cautiousness and sight of the bigger picture. Politics aside, the way Hillary Clinton carried herself through the defeat, the message of unity and hope in the face of chaos, fear and hate, is I think something that is replicated by so many women on a daily basis. It’s women like this that remind me to keep the bigger picture in mind, our work here is not done yet.

RB: What is the vision for your business and where do you see yourself 5 years from now.
GN:  To run a successful group of companies that all help empower women in different aspects of their lives and careers; I can’t really imagine anything being more fulfilling than that.