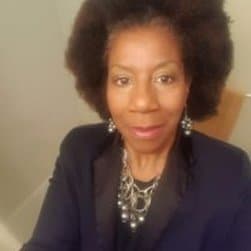 By rarebirds 18.12.18
Loretta’s love of research and writing established her academic presentations in postcolonial feminism, ethnomusicology, and her theoretical construct called sociospiritualism. She has been recognized by the 2017 New Jersey Historical Commission regarding her current research on South Jersey’s soul music routes during the Civil Right Era entitled “From Raw Blues to Silky Soul: South Jersey’s Chitlin Circuit Route (1948-1978)”. She has since authored “Killing Me Softly With His Words: A Child of God’s Response to Domestic Violence,” ( ASIN: B074FK3RL8) and a hobby-novella “In the Case of E.M.H.” ( ASIN: B01M6VEX7E) with Amazon Kindle.Loretta sits on a special counsel as Public Relations for CACCI, and writer and Executive Producer for CaribME: New Yorkers of the Caribbean Diaspora, a documentary of Caribbean New Yorkers, that was featured during Caribbean American Heritage Month Luncheon at Brooklyn Borough Hall.

Loretta is founder/Editor in Chief for Caribeme Magazine that will launch January 2018, as fashion-forward lifestyle magazine from the Caribbean diaspora woman’s perspective. Loretta is host-producer for Sumatra Blog Talk Radio; CCO/Founder of Women of Concern Professionals & Strategic Conscious Networking (WOCPSCN).

RB:  Tell us about your typical day. What time do you start? What do you do? How does your day end?
LGW: I wake up between 4 and 5 am.  My Three (3) P’s “Prayer (Honor God), Praise (Song and scripture), Practice (stretching and exercise)” allow me to prioritize and process my daily activities.

RB: What do you do to preserve your health as you run your business?
LGW:  I was in the fitness industry for 20 years prior to my business transitioning (personal trainer, advanced cardio, yoga instructor).  Maintaining my health is critical, and I share with others often details on: healthy breakfast, exercise, relieve stress.
RB: Can you discuss some of the major changes that have occurred between starting your business and where it is now? For example, business model or management changes?
LGW: I would like to begin with my challenges:  Overcoming traditional obstacles:  In 1982, I entered the fitness industry and was observed as an anomaly to many. While black women entry into bodybuilding transitioned, black women in fitness did not.  The first fitness workshop I attended, in 1984, I was ostracized; no one would talk to me.  I was the first personal trainer to be hired by Bally’s in 1990, and men wouldn’t respect my knowledge.  But, it wasn’t any more than other’s before me, so I maintained in order so that other women of color could enter.Ageism as an Intersect: My greatest challenge is passing ageism.  I was in my 50’s when I began my consulting firm, and now in my 60’s beginning a magazine.  RB: What are some of the challenges you are facing or have faced this year?
LGW:  The preconceived notion that success is solely monetary.  Designing Caribeme Magazine premise is to provide a cultural platform for Caribbean diaspora women.  What becomes problematic is when businesses see this as an opportunity to disrupt instead of instruct.  As a Caribbean culturalist (postcolonial anthropologist), I believe my role is to protect culture and Caribeme Magazine is a way to do so.

RB: Describe what innovation means in your business and how do you go about it?
LGW:  Innovation is Caribeme Magazine.  Currently, the magazine industry is not addressing the Caribbean diaspora female community.  We are blended into Latinx and African-American in the US.

RB: How do you balance being a “big dreamer” vs setting realistic goals for your business?
LGW:  “Dreams can be made to goals that can be a reality.”  This has always been my philosophy based on my upbringing.  As a youth, my father never separated me from action and gender that I created a methodology I call transgenderism, which now has taken more thought.  Now I still believe there is nothing I can’t do.  Developing an international magazine is more than challenging, its exciting.RB: Who or what motivates you to keep going with your business? And Why?
LGW:  I am motivated by sustaining a legacy.  I consider matriarchism an important component of business development as I mentor the next generation.  Caribeme Magazine’s administrative team are all under 40 and it’s exciting to be the “Momma LO”.

RB: Has your definition of success changed since you have started your business? If so, how?
LGW:  Success is accomplishing your goals, not financial achievement.

RB: What would you say is the most important skill required to run a business?
LGW:  Tenacity.  You have to believe in your dream and your direction.

RB: There are a lot of myths about entrepreneurs. Now that you have started and are successfully running your own business what would you say is the biggest myth? What have you learned most from it?
RB: I believe the greatest entrepreneurial myth is self-inflicted; doubting oneself, which is one’s greatest destruction.  I still believe it within my current formation; the myth that gender, age, historic-nationality, is one’s greatest success which is the greatest myth.