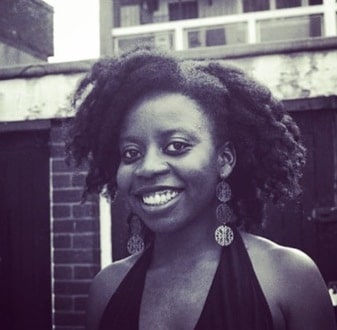 Ifeyinwa Frederick is the Co-founder of Chuku’s, the Nigerian tapas lounge. With the aim of putting Nigerian cuisine on the UK foodie map, she launched Chuku’s with her older brother Emeka in the summer of 2015.
​
An avid dancer and lover of the performing arts, her first company was a dance school which she set up when she was just sixteen. She is also the Founder of mental health blog, Grey Matters, a space for those with lived experience of mental illness to share their stories. A keen traveller, she spent the best part of the last 18 months living in Martinique and later France, perfecting her French.

RB: Tell us the why behind your business.
IF: Chuku’s is the Nigerian tapas lounge, so why Nigerian food? And why tapas? Currently in the UK, there are a very limited number of establishments where Nigerian food can be sampled. Moreover, where they are found they are most often frequented solely by members of the diaspora. But most Nigerian foods are not an acquired taste, they can be enjoyed by the country’s wider population and Nigerian cuisine should be able to join the ranks of Indian, Chinese, and Mexican to become one of the country’s most popular ethnic food choices. Both my brother and I, both know Nigerian food tastes great and we wanted other people to see that too.The decision to add the tapas serving style was to cater for our guests’ potential lack of familiarity with Nigerian cuisine. It makes the experience of trying a new cuisine less overwhelming as guests aren’t forced to commit to a single dish but can choose a selection of Nigerian mini-dishes to share and try. Moreover, tapas bars in Spain are a place for people to chill out. Both my brother and I have felt the lack of chill-out spots in London, so we set up Chuku’s to be one.

RB: What major challenges did you face when setting up your business and how did you overcome them?
IF: Two of the biggest challenges I faced were time and fear. As we released the tickets for our first event I had to ask myself what were we doing? Neither my brother nor I came from a catering background, I’d never even worked in a restaurant and here I was a year out of university trying to set up a food establishment. Maybe if I had been doing it alone, the fear may have won and paralysed me. But the beauty in having a business partner whose opinion I trust and respect as highly as my brother’s is that whenever I wavered, his confidence in us spurred me on.

The other biggest challenge was time. When we started I was working full-time, running the Grey Matters blog and organising an art exhibition. After our two summer events, I moved to France and was working part time out there whilst continuing to work on the business. My brother was also working full-time. As much as I think I’m good at multi-tasking, it was proving too much. Avoidable mistakes were being made, progress with tasks was slow and working on the business was starting to feel like a chore as I was becoming increasingly tired. After a frank conversation with my brother we decided we were both trying to do too much. My Dad had often told us before to, F.O.C.U.S, follow one course until successful and with time, a limited but valuable resource that’s what we decided to do. We now work full time on the business and have seen the difference it makes in our output.

RB: Who has been the greatest influence on you since starting your venture and why?
IF: My parents’ support, as always, has had a great influence on me with Chuku’s. In fact, their unwavering encouragement enabled me to start the business in the first place. Not everyone would be okay with their Cambridge graduate daughter choosing to ignore the city life and set up shop in an industry unknown to her because she thinks she has a good idea. Knowing you have people behind you that are with you no matter the outcome is liberating. In addition to the two of them, there is my dear friend, Siana Bangura. One thing I find so inspiring about her is her go-getter attitude. If she sees an opportunity, she will grab it. If she wants something, she will go and get it. If she has an idea, she will make it happen. Since leaving university she has chosen the path less travelled, and with her work with No Fly on the Wall, her upcoming poetry book and a documentary film on the way she is making a success of it. Having a friend who so fearlessly goes for what she wants really has influenced me along my journey with Chuku’s. If I doubted that I could make it work, there was always Siana showing me that it is possible to live out your dreams.

RB: What is the vision for your business and where do you see yourself 5 years from now?
IF: Currently, Chuku’s runs as a pop-up but in the next 18 months I see us opening up a permanent restaurant space. Five years from now, I want Chuku’s to have brought Nigerian tapas to other UK cities and be a household name with ‘chop, chat, chill’ entering common parlance. Aside from Chuku’s, I also see myself returning to the performing arts. It’s my first love and they say you never forget that so, whether it’s re-opening my dance school or producing new plays, I can see myself working back in the performing arts space.