“Wicrypt is the first African company to build a peer-to-peer infrastructure for sharing mobile internet data without need for third-party integration.”

Wicrypt is a decentralized mobile internet sharing and monetization network, allowing anyone to get paid for sharing their WiFi. Wicrypt is the first African company to build a peer-to-peer infrastructure for sharing mobile internet data without the need for third-party integration. WiFi can be shared via Wicrypt’s custom, affordable Hotspot Creator or mobile devices, while providers can tailor unique experiences, including surveys and ads, while collecting customer data.  An already profitable company, Wicrypt has an exclusive partnership with the city of Enugu, Nigeria, to provide last-mile internet service to its citizens.

In 2020 Wicrypt  won the Africa50 Innovation Challenge. They received a grant of $5,500 from the Nigeria Communications Commission (NCC) and an approval to operate as a result of emerging as one of the winners of the Emerging Technologies competition, which was also organized by the NCC.  They also raised a funding round of $1.5M by industry leaders in the blockchain space.

In the Beginning with Ugochukwu Aronu

As a young software engineer, before starting Wicrypt, I lost my internet connection while working. Needing to finish my work, I reached out to some colleagues to share their hotspot, but they refused, saying that I would consume a large amount of data – which anyone in Africa knows is quite expensive. I said I would pay them, but they could not quantify the amount of data I would use, which got me thinking… there’s a business and a need for this. At that point, I decided I would create a system that would enable people to share their WiFi and get paid in real-time. I shared the idea with a developer friend of mine who thought it was a great idea and that’s how Wicrypt began in 2018. 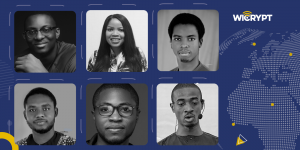 Wicrypt has an international team with experience working for some of the world’s largest employers, including KPMG, Chevron, Accenture, Nielsen, Huobi, and MTN Group.  A diverse team with broad experience is needed to build Wicrypt, which is a decentralized mobile internet sharing and monetization network, allowing anyone to get paid for sharing their WiFi. Wicrypt is the first African company to build a peer-to-peer infrastructure for sharing mobile internet data without need for third-party integration.  We have an international team, but we’re headquartered in Enugu, Nigeria.

Wicrypt is solving a number of problems, particularly the high cost of mobile internet data. Our network is actually a win-win for everyone involved, bringing availability of mobile internet data to urban and remote regions, while allowing everyday people to earn passive income without having to lift a finger.

Currently, we live in a highly centralized telecommunication market. All the power is held by a few companies. We empower everyone to monetize off their own internet data.  On top of all this, the industry lacks Innovation and underutilizes mobile infrastructure. We are bringing urban and remote areas into the most advanced internet data sharing network in the world! It’s a smart WiFi network powered by the people, for the people!

Decentralized internet makes the cost of internet connection very cheap, while making internet highly available in remote and rural areas. WiFi can be shared via Wicrypt’s custom, affordable Hotspot Creator or mobile devices, while providers can tailor unique experiences, including surveys and ads, while collecting customer data. Hotspot creators will be able to mine $WNT which is the native token that will power Wicrypt ecosystem economy as an extra incentive for providing a decentralized internet.

Wicrypt creates an open data network that shows real performance of internet service providers to enable them to improve and creates better user experience as people can access any network at anytime without depending only on the networks on their mobile devices. We Incentivizes users to create and manage a secure and highly scalable mobile internet infrastructure without any restrictions from a central body.

It’s hard to not mention all the benefits of our network, but I’ll just provide one more for now! Wicrypt provides a high level of security, as the creators of this decentralized network (those offering their hotspot) are required to stake tokens to ensure they do not engage in malicious activity.

We have introduced our Wicrypt Hotspot Creator. These devices allow users to become micro internet service providers anywhere in the world. The devices transmit real-time location and allow over 70 concurrent connections at any point in time! The devices allow users to mine $WNT, which is Wicrypt’s native cryptocurrency token, when providing mobile internet service.  $WNT is the native cryptocurrency that powers the Wicrypt network.


Our Android and iOS mobile allow users to access Wicrypt-enabled hotspots anywhere in the world. Users can also locate nearest hotspots and manage their wallets using their mobile apps.  Our latest offerings is the Wicrypt Explorer, a software infrastructure that shows all the transactions, devices, data bandwidth transmitted by an ISP, ISP name, and up-time per device in real-time. The explorer creates an open data network that allows secure and transparent viewing of mobile internet data transactions anywhere in the world in real-time.

This product is the first of its kind in the world. Before now, for people to access mobile internet statistics, they had to rely on consulting firms or research centers and the source of the data couldn’t be truly verified as it is delivered by centralized companies. But now, each device is owned and managed by the people who are committed to ensuring the security of the network and hence data integrity is assured.

Wicrypt partnered with the Enugu State Government to provide affordable WiFi for the whole state as well as create a revenue generation stream for the state government. The biggest WiFi zone in the southeastern part of Nigeria was set up as a result of this partnership.  We’ve also partnered with omnibranches to allow each member of its mobile money agent network to become active hotspot zones. The agents are able to provide hotspots to nearby customers and earn passive income.

On Being the First Blockchain-based Wifi Sharing Network in Africa

We are creating more value for the blockchain. Usually in the blockchain space globally, there is a misconception that the blockchain can and should only be applied to finance. We are excited to be applying the blockchain to the telecommunication industry which has been greatly centralized since inception.

Before now, people would depend only on large telecommunication companies to provide internet service infrastructure in remote areas and this might take years to happen. With the decentralization of mobile internet data, individuals are greatly incentivized to provide mobile internet infrastructure in areas without access as they earn both crypto and payment from the individuals in those regions. With decentralization, we have noticed a rapid drop in cost of mobile internet data. This is a result of increased supply as anyone can now become a vendor or micro internet service provider.

The Future of Decentralised Blockchain-based Internet

I believe the future of mobile internet will be a majorly decentralized future. It can’t be completely decentralized as the major telecommunications companies still play a major role in the entire network, but it creates a more accessible and cheaper service which will lead to a more connected world. The idea of bringing people closer to themselves and closer to information is really exciting as people are bound to make great discoveries and progress when they access information easily. This is really inspiring and we are happy to be building this.