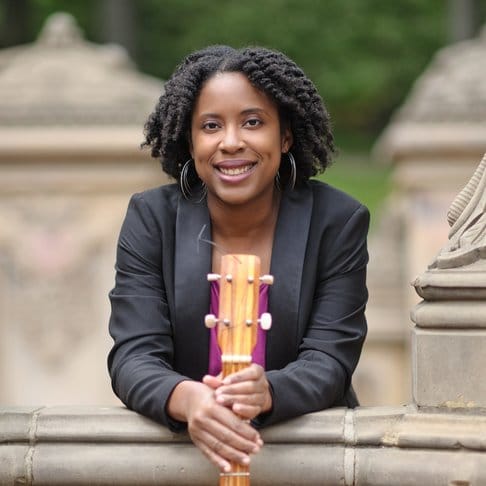 Danielle Brown, Ph.D. is the founder and owner of My People Tell Stories, LLC (MPTS), a company that she founded in 2014. Based on the premise that people of color in particular, and marginalized people in general, need to tell and interpret their own stories, MPTS provides educational, cultural, and performance-based services that center on the people of the African diaspora with a specific focus on the Caribbean region. Brown received her Ph.D. in Music from New York University with a concentration in ethnomusicology, and a specialization in the music of Latin America and the Caribbean. Her research has focused mostly on parang/parranda music in Trinidad and, more recently, the intersection of music, spirituality, and healing. Before starting MPTS, Brown served for two years as an Assistant Professor of Music History and Cultures at Syracuse University. She has lectured at various colleges and universities, and has also worked with elementary, middle, and high school students; she is certified in the Kodály method of music education. Brown is an active vocalist and cuatro player, and she composes and performs jazz and Latin American and Caribbean-based music. She is author of the ground-breaking ethnographic memoir, East of Flatbush, North of Love: An Ethnography of Home.

RB:  You started MPTS to redress the balance which exists for people of colour in the field of music. How has it been received by the mainstream?
DB:  I started MPTS because as an ethnomusicologist working in academia for more than a decade, I was disturbed by the fact that people of color were overwhelmingly represented by white researchers. And although many of these researchers are bright and well intended, the products of their research often privilege Euro-American knowledge and ways of being. Essentially, the field is still a colonial enterprise, and it will continue to be such unless and until people of color are able to tell their stories without the filter of a Euro-American gaze. I started My People Tell Stories to promote the message that marginalized people, and especially people of color, need to tell and interpret their own stories. People have been very receptive to that message, an indication (I believe) that people are yearning to tell their stories and to hear stories that adequately represent them.
RB: Your background is in music, when were you introduced to music and at what point did you realise it would be your career?
DB:  I was probably introduced to music in the womb, but I decided to make music a career when I was in college. Although in all honesty, I always imagined myself as a musician, even as a young child.
RB: Music is a big part of Caribbean and Latin American culture. Do you believe enough is being done to preserve these musical traditions?
DB:  I don’t really like to get into the preservation debate because it can be problematic. There is a history in anthropology and ethnomusicology of researchers trying to “preserve” cultures in patronizing and infantilizing ways. If there is one thing that the history of Caribbean music has taught us is that in the face of slavery, colonialism, imperialism, and all the kinds of violence that are part and parcel of those experiences, Caribbean people have been able to maintain a connection to their music and cultural past.
RB: You have designed three distinct programmes. Who generally participates in these courses?
DB:  The programs are fairly new, so it’s perhaps easier for me to tell you who the programs are designed for. There are pedagogical programs (i.e. Caribbean Music 101, Caribbean Music Pedagogy Workshops) that target music educators, although they are open to all interested adults. Our Community Parang is conceptualized as a community affair that allows people to participate in parang (or parranda in Spanish), a music and performance tradition mostly associated with the Christmas season in Trinidad. It’s a way for people to come together and make music during the holiday season. And this Fall, I’ll be adding an additional program—Vocal Arts of the Caribbean. That program will be geared towards young people between the ages of 10—17 who are interested in developing their vocal skills while specializing in music genres from throughout the Caribbean. Crucially, participants will also learn about the history of the Caribbean through music.RB: Tell us more about your book East of Flatbush, North of Love: An Ethnography of Home?
DB:  As I say in the book, “East of Flatbush, North of Love is a labor of love, an ode to my family and to my culture.” I call it an “ethnographic memoir,” meaning that although it is a memoir, I am approaching and examining my life within specific historical and cultural contexts. The book examines growing up in the West Indian enclave of East Flatbush, Brooklyn. Much of the book centers around music, and it pays homage to a borough that is quickly changing under the specter of gentrification. I use music to teach the reader about life in East Flatbush as well as in my parents’ native Trinidad. Recalling the songs of my youth, especially the ones that my mother would sing to me, I employ music—from calypso to hip hop—as an educational tool to teach history and to illuminate how the legacy of colonialism and imperialism continues to impact people of color today.

RB: What are some of the challenges you faced whilst building your enterprise?
DB:  I think a lot of the challenges stem from the unpredictability of running a business. Especially at the start, you may find out that your best-laid plans do not pan out. For example you may find out that your intended audience is not the audience that gravitates to you, which results in you changing your entire marketing strategy. As a person who never went to business school and didn’t come from business-minded family, I think marketing has been one of the most difficult things for me to learn. Another challenge is being “chief cook and bottle-washer.” Especially at the beginning, I found myself doing everything, taking on jobs that I had no experience in (like designing my website). To a certain extent, having to do more than you are seemingly capable of is beneficial. It forces you to learn things that you might not otherwise. On the other hand, it can be exhausting.

RB:  “If you’re not telling your own stories, someone else is telling them for you” is your company’s  tag line. It is similar to Chimamanda Adiche’s Ted Talk on the Power of a Single Story. Do you believe Caribbean people are in charge of their own story?
DB:  Adiche’s talk was about the danger of hearing only one kind of narrative. She states that when she began to write at the age of 7, she wrote stories that were similar to the stories found in the British and American children’s books that she had been reading. It was only when she began reading books by African authors that she realized that books by their very nature did not have to only be about foreigners and their experiences. She described it as a “mental shift.” And as I mentioned in my book, the process of writing East of Flatbush, North of Love was an act of decolonizing my brain. It was an act of remembering that not only could I write about myself, but also that I could write about myself in any way I saw fit, and not just in the ways prescribed to me by academia. My aim was to provide more depth to the experience of a Caribbean American person, a depth that I didn’t see often in ethnomusicological works.

To answer your question—to a certain extent we are all in charge of our own story. We all have the ability to open our mouths and say something. However, often we are conditioned to be fearful of telling our stories. We don’t tell our stories when we believe that our stories are neither powerful nor valuable. Then other people’s stories become more important than our own. And when we don’t believe in the value of our stories, we leave other people to tell them. Then these people (intentionally or not) often distort our stories, silencing crucial aspects and privileging what may be interesting to them, but unimportant to us. So again, to answer your question—Caribbean people are in charge of their own stories. However, I think we have yet to truly take charge of our stories.

RB: What is the biggest misconception about Caribbean music?
DB:  Caribbean music is not monolithic, so I’m not sure I can say that there is one big misconception that applies to all the region’s genres equally. I will say that I wish that people really understood the depth of Caribbean music as a whole, particularly the historical influences that have led to the creation of different genres and styles. Often Caribbean music is painted as this “happy-go-lucky” dance music that makes people feel good and free. As a result people not only minimize the problems faced in Caribbean societies, but also fail to see Caribbean music in its totality, in all its complexity and depth.​